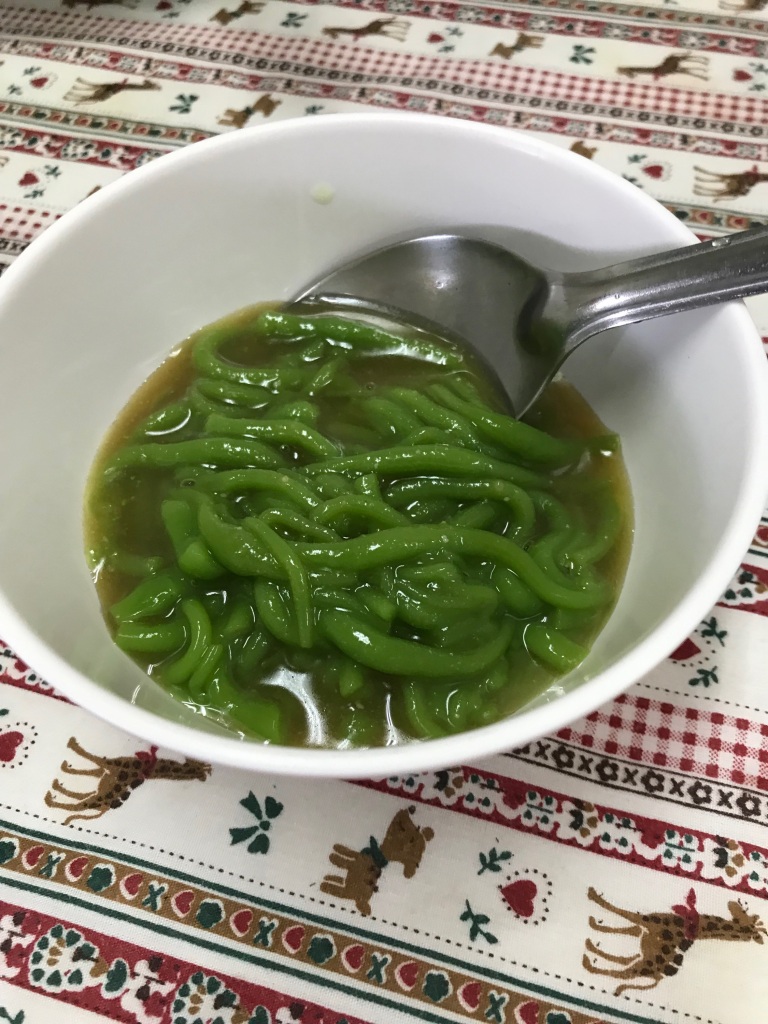 You would think the word “dessert” would always be an eager sound to my ears but in Thailand I always hesitate with food.

JELLY (like jello) is literally their main dessert in Thailand and of course that’s one of the things I never ate in America because there aren’t chocolate chips in jello. (Actually I do not do squishy things.) Texture is a big thing with me so anything squirmy and slimy might as well slide right back out of my mouth. I want it burnt, crunchy, and almost rock hard. True Story.

So as I was saying, jelly is a popular dessert. It’s mainly flavored from flowers and leaves. Black jelly, made from herbs, goes in Thai Tea; I still don’t appreciate that taste combination yet. Another Thai dessert known as “Sago” (we would pronounce Sakoo) is little green beads of jello that are are put in boiling water. Once it’s all stirred up, you pour coconut milk over the beads with chunks of bread that become very soggy. Minus the bread, I actually now love Sago dessert!

The dessert pictured is the one I was given today. It’s called, “Lot Chon”. It looked like a bag of green worms but I knew it was going to be slimy jelly. All I can say is if it’s not raw pork, and I’m not allergic to it, that means I’m going to eat it. And that was some VERY rich syrup. It actually gave me a terrible tummy ache because it was so sweet, but I’m totally fine now. I am not a fan of this one.

There is definitely no in between for Thai food. It’s either going to set your face on fire or be terribly sweet! I was so excited to find toasted garlic bread the other day, but to my dismay it was covered completely in sugar! Who does that? I had a really good couple of different pork dishes last week and I ordered them both, “mai pet” meaning not spicy. My lips were quivering and my nose running. I don’t know how these people do it but for sure God has given us different taste buds of what we can and cannot handle!

Pray He allows me to handle a little bit more each day – the spicy and the slimy.