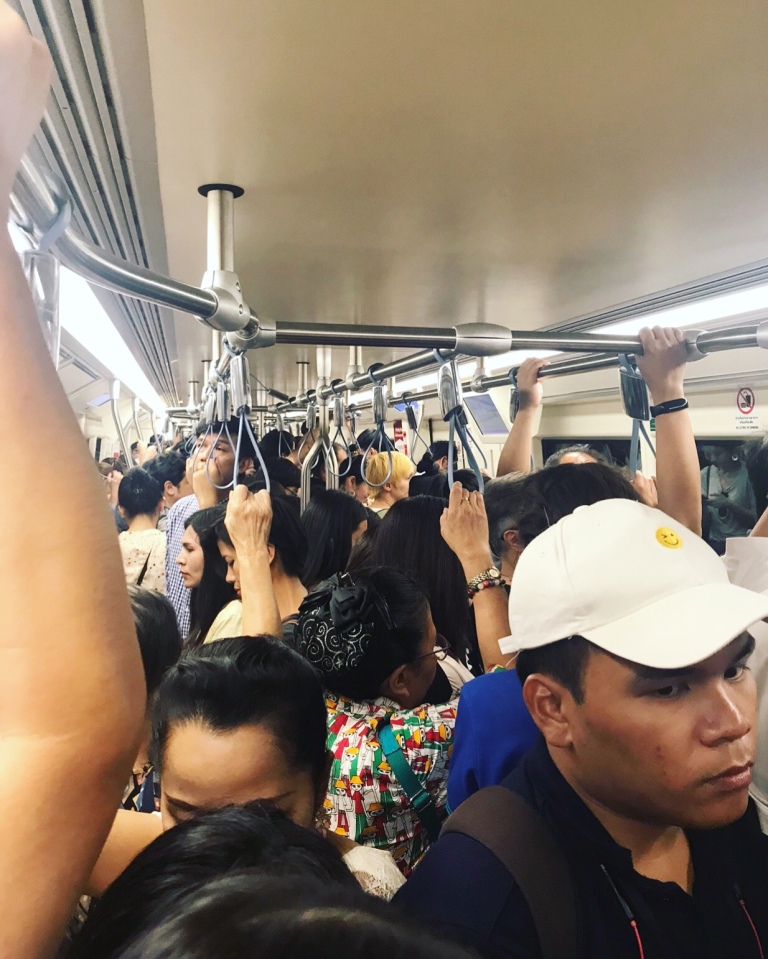 My “Getting Around” Life in Thailand

People have asked me how I just “knew what to do” when I got to Thailand. I thought about it for a minute and I’m like, “No, I didn’t know what to do.” I was a very confused human being coming to Thailand. (Haha) I realized I have just learned how to do stuff by myself of what to do and not to do. (AKA getting lost and following google maps.) It’s all part of the experience, adventure, and “live and learn” process.

So living in Thailand there were quite a few changes I had to get used to. It’s not like I could grab my keys to my car and drive around and go where ever I wanted to. I’m also not one wanting to be stuck or dependent on someone else, not to mention there is a huge language barrier.

I found out I lived close to a MRT station which is a huge blessing. It only costs me 30 baht ($1) by motorbike to get to it. The MRT is an underground sky train that goes to a lot of different stations. I have gotten on and off the exits to experiment with my surroundings and know where I could find things. This included walking for 20 minutes to find the closest Burger King near me. Now that I’m almost done serving in Thailand, I found out I can order Burger King through an app and have it delivered to the Church within in hour. Seriously? It’s ok, I needed the walk. (Haha)

I go to Thai school three days a week mainly on Monday, Wednesday, and Friday. It takes me an hour to get to Thai school and 2 hours to get back because of all the traffic. I study for four hours with an hour break making it a total of five hours at the school. I walk down to the curb of my apartment and wave my hand until a motorbike taxi sees me. I say, “bye MRT kha” (bye is “go” in Thai) or if they don’t understand I say, “bye rot fay faa taydiin satanii Lad Phrao kha” which is “underground skytrain station” in Thai. The motorbike taxi takes me to the MRT and there I go through security and down four flights of escalators under ground. I have a card that works like a debit card that I swipe at the station to get through the gate. It subtracts money off of it when I get to the next station depending on how far I go. I go back up all the escalators and walk for about 13 minutes and that’s how I get to Thai school.

At first, I had a hard time pronouncing my address to the motor taxis in Thai when I needed to get home from Thai school. I had the address on my phone in Thai and English to show them but sometimes that didn’t work. Sometimes I would end up who knows where and I would be shaking my head in panic refusing to get off the motorcycle because that wasn’t my apartment.

Laundry is a chore in itself. I live kind of close to a laundromat but not close enough to walk to it. I have walked before but carrying laundry that far is just absolutely exhausting not to mention when it’s wet after you’ve washed it. I carry it down to the curb and get a taxi to a certain coffee shop and walk from there to the laundromat. I’m very grateful when I get to wash my clothes at P’Pan’s when I can. I hang up and line dry all my clothes outside my apartment’s balcony. It’s made just for drying clothes for all Thai people line dry their clothes.

Down every main street there are alleys. So at my apartment, across the intersection, down my alley at the end there is a school. So when I need to make copies for teaching, I would walk almost half a mile to get them printed. I made friends with the Coke stand lady at the end of the street since I have to walk so far. Plus it being so hot, who doesn’t want a big cup of ice with Coke?!

Grocery shopping is really different. It goes from knowing just about every food in America to recognizing only a few things here and there. At least toilet paper still looks the same but people don’t even have that in their bathrooms here! They use toilet paper for napkins at the dinner table. So I found a grocery store that has some imported goods in the basement of a mall. It takes me almost 45 minutes to get there, but the hard part is carrying it all back. It gets heavy walking and carrying it for 45 minutes in the MRT, then having to hold it on a motorcycle. I don’t have to get a ton at once but at the same time with my schedule who has time to make several trips a week? I will never complain about having to carry groceries from out of the car into the house ever again.

So yeah, that’s kind of how I do my day to day stuff outside of teaching/meeting/studying life. I’m able to cram it in there somehow. 😉

*This is a picture of how crowded it is at the MRT everyday at 5:00pm.

One Reply to “My “Getting Around” Life in Thailand”