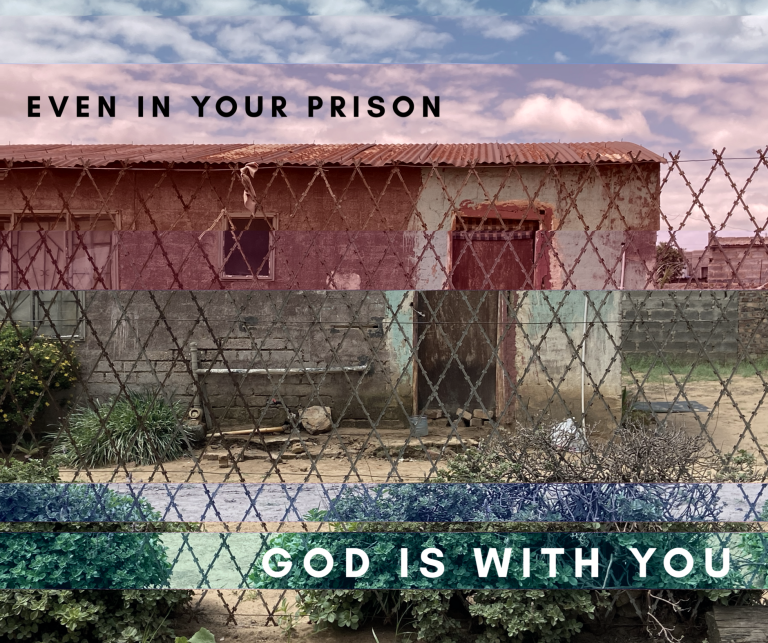 Even in Your Prison – God Is with You

Ever feel like nothing is going how you planned?
I have to say that’s probably everybody right now with COVID-19.

At the beginning of this year, 2020, everything was going perfectly as planned. Too perfect in fact, that it actually made me stop in my tracks. I felt God tell me that my life wouldn’t go as I had thought. Nervously, I’m thinking ok – how far is God warning me about this because I have a lot planned out…like a lot. (Haha)

Praying about this, God has been showing me time and time again my life is like Joseph.

I’ve always loved Joseph in the Bible. I love his attitude. His approach to life. His leadership. His humbleness. His wisdom. He just has a lot to offer with how he lived his life for us to learn from it.

We find his story starting in Genesis 37.

God gave Joseph a dream when he was 17 years old.

The dream God gives you is mainly just the desires of your heart. We all have them. Every single person has them but not one is the same. We are all different. Our minds all think differently, we were all gifted with different things. I’m not talking about the type of dreams that you have while you’re sleeping. That’s not what I’m talking about. Just talking about what you basically want to do and where you want to go with your life.

I have many dreams but they have basically all been the same throughout my life: To be on the mission field. Get married and have children. Be in the ministry with my husband. Own an adorable old home. Own an orphanage with little children running around raising them in Christ. Having my own photography business. I have a lot of different dreams, don’t I? I want to do a lot. I guess I’ll always be busy in life. (Haha)

But with Joseph’s dream, God was showing him what was to come to pass in his life. Joseph believed in God and He believed after receiving this dream that it was going to happen. And he shared it. While sharing his dream, his brothers became jealous of him. Some people also favored Jospeh including his own father. He made him a coat of many colors. The Bible says Joseph was also handsome, not that that matters but it helps. Joseph just seems to be a likable guy, but to some people maybe he was just too likable and they wanted to get rid of him.

Everything was going great for him, then the next thing he knew, he was thrown into a pit. Sitting in the pit he was probably scared for his life that he’s going to die, or his brothers will pull him back out and kill him.

Instead they sold him into slavery in Egypt. He’s not accustomed to the Egyptian culture coming from the land of Canaan so there’s a different lifestyle, food, maybe even language. The Hebrews weren’t allowed to eat with the Egyptians, so I’m sure Joseph felt out of place and betrayed too. The Bible doesn’t say, but I’m sure he had struggles with it.

He started working for Potiphar and it seemed to be going great until his wife went and messed it all up and put him in prison for something he didn’t do. In fact, he was running away from the temptation, he ran away from the sin, and he still was put in prison for it. Sometimes doesn’t it seem that whenever you try to do something right, it never works out does it?

Sometimes you might feel and say, “Lord, I have done everything You have said. I have lived right. I have lived by Your standards. I have shared what You laid on my heart. I tried to live a holy life – and prison is where it has led me?”

I read this last night on Facebook and thought it fit perfectly. The quote said, “Sometimes God allows us to go through difficult times, even as a result of the wicked actions of others. Yet, whatever we have to endure, no matter how unfair or unjust, we can be sure that God will use it for good.”

As I read that, I thought of Joseph. His life was built entirely on other people’s actions of why he was sold to how he ended up in prison. It’s important what actions we live by for it affects other people too. But God didn’t show Joseph what it was going to take to fulfill his dream did he? He showed him the end. Sitting in prison, Joseph didn’t know what was going to happen to his life or even what would become of his dreams because that’s not what he saw in his dreams.

Now the Bible doesn’t say Joseph complained through any of this. It doesn’t share that he was angry. It never says that He questioned God about His plan. Joseph seemed to live a humble life towards God. It amazes me reading this that he didn’t try to escape prison. I’m assuming that he wouldn’t want to go back to his brothers seeing that they betrayed him, but he didn’t fight against God. I know I would try to escape prison for something I didn’t do.

I love Genesis 39:23 it says, “The Lord was with Joseph and whatever he did, the Lord made it succeed.” Praise God! God was with him.

But through all of these obstacles in his life, Joseph knew that God was with him. Whatever Joseph did, the Lord made it succeed.

This shows me that sometimes the will of God is hard. The will of God can be a hard place. Because it’s there God is preparing you for the next thing. Sometimes God has to mold us a little more, wait for us to grow up a little bit and mature in Him for us to be able to do what He has called us to do.

You know, going to Thailand for a year was a pretty big thing for me. Probably one of the biggest things I will ever do in my life and I did it being so young, not knowing much and literally figuring things out on my own was a struggle.

But whatever I did in Thailand, the Lord really helped me. I felt Him so close to me all the time. I even passed with the highest score in my writing Thai class when I didn’t even get to take that class yet. Teachers couldn’t understand it. Learning Thai is the hardest language to learn for people who mainly speak English for we don’t have those tones. The Vietnamanese, Japanese, Cambodian, Laos, Taiwanese – all those people can pick it up faster because they have the same dialect. It’s crazy. There were even Thai people in my Thai class taking Thai cause it’s hard. If that isn’t depressing enough…(haha)

But actually half way through my year being in Thailand, people were already asking me what I’m going to be doing next. I’m honestly answering, “I don’t know.” God told me to do this and when it’s finished then I’ll know. At the beginning of the year, I had a general idea of what I felt God wanted me to do in 2020. Now it being the middle of March, it has completely changed.

But I’ll be honest with my life – I couldn’t thank the Lord enough where He has me and what I’m doing. It’s not at all what I planned out for my life whatsoever but God does and knows exactly where He is leading and guiding me.

But why I was sharing this is because Thailand being such a big step and a big task for me, I was praying and asking God what He wanted me to do next because my life is forever changed and different from what I just did. I then felt God put this in my heart,

“What if the next thing God is calling you to, is smaller than what He called you to do before?”

From Joseph working into his father’s field to being thrown into a pit, up from the pit being sold into slavery, working as Potiphar’s slave then being thrown into prison – I would say his life was definitely an emotional roller coaster. His task seemed to be getting smaller and smaller in the eyes of man. Could Joseph’s life get any lower?

Sometimes when God tells us something, in our human way of thinking, we think it’s going to happen right then and there. Look at the disciples about Jesus telling them he was coming back. They literally thought it would be in their lifetime. Here we are in the 21st century, and we believe He is coming back! But that doesn’t mean it happens in our timing but in God’s timing.

In the end, Jospeh’s dream became reality. But it was up to Joseph what he was going to make of it. He had to forgive his brothers and work through it to show compassion on them at the end and that’s what God wants to do in each and everyone of our hearts. To come to a place to let God have what He wants, our dreams, our desires. Let Him place those in your heart to fulfill for His purpose. God wants us to surrender all our rights to Him. Sometimes we want the power without the wilderness and Joseph had to go through the wilderness to get the power.

None of us like the prison, I’m not enjoying it right now at the moment, but I know He’s preparing me to go on to the next thing. Your dream from God will come to pass.

We all have a different prison that we are in. We all fight different battles whether it’s finances, depression, relationships, overloaded with responsibilities, loneliness, anxiety, health, even everything being upside down right now in the world with COVID-19, the list goes on but I just want to encourage us today, that the Lord was with Joseph and He is also with you.

Just remember that we serve a God who is always faithful. Everything is for a purpose. Romans 8:28 “And we know that for those who love God all things work together for good, for those who are called according to his purpose.”

Everything is for His purpose of why He has you where you’re at right now. Whatever dream or desire you have, whatever prison you’re in at the moment, He’s going to use it not only for your good and for others, but for God to get the glory.

I’m going to end on one of my favorite quotes:
“Joseph was a dreamer but being in prison wasn’t in his dreams.”